Lecture by Phillip A. Horwitz, MD

All forms of ACS (unstable angina, NSTEMI, and STEMI) are all due to reduction in coronary blood flow

Incredibly common diagnosis. 1.6 million in US annually – Roughly 50% have UA and the other 50% have MI

Standard therapy, they present to ED with chest pain. They get vitals taken, IV put in, oxygen applied (though some recent data shows that over oxygenation may be harmful, certainly should keep >90%).

They are then stratified based on the EKG findings. If no ST changes, will stratify based on troponin elevation

Flat and down sloping are more specific for ischemia.

Unlike patients presenting with STEMI in which there is a clear mortality benefit to emergent coronary angiography and PCI, it is less clear whether patients with non-STEMI ACS (unstable angina or non-ST segment elevation MI) also benefit from routine early angiography and intervention.

The 2001 Treat Angina with Aggrastat and Determine Cost of Therapy with an Invasive or Conservative Strategy – Thrombolysis in Myocardial Infarction 18 (TACTICS-TIMI 18) trial randomized 2220 patients to either a protocolized early invasive strategy versus a delayed selectively invasive strategy with each arm receiving the IIb/IIIa inhibitor tirofiban. In the early invasive strategy arm, 97% of patients underwent coronary angiography a median of 22 hours (all within 48 hours) after presentation with PCI or CABG to culprit lesions. In the conservative strategy, patients underwent coronary angiography only if noninvasive stress testing was positive or there was failure of medical therapy (prolonged angina at rest, hemodynamic instability, recurrent angina or MI). Overall, 60% of patients in the early invasive arm underwent revascularization versus 36% in the conservative arm. TACTICS-TIMI 18 demonstrated a clear reduction in major adverse cardiovascular events with an early invasive approach, driven primarily by a reduction in nonfatal MI and recurrent ischemia. This benefit was most apparent in patients presenting with ST segment changes, troponin elevation at presentation, and patients with intermediate or high TIMI risk scores (3 or greater). Notably there was no mortality benefit with an early invasive approach, and this strategy was associated with a 2% absolute increase in protocol-defined bleeding. Importantly, patients with TIMI score 0-2 and patients with undetectable troponins (25% of the study population) did not appear to benefit from routine angiography and PCI, suggesting that it is reasonable to pursue stress testing in these low-risk patients with intervention reserved for patients with significant ischemia on functional testing.

Overall the results of TACTICS-TIMI 18 provide practical guidance for the selection of patients who are most likely to benefit from early coronary angiography and intervention in non-STEMI ACS. It is important to note that although both the biomarker and TIMI risk stratification findings (i.e., patients with negative troponins or patients with TIMI risk score 0-2 do not benefit from an early invasive strategy) are often incorporated into routine clinical practice, the interaction between the primary outcome and these individual subgroups did not reach statistical significance; however, given stark numerical differences and apparent risk-response pattern within the TIMI score group (i.e., as TIMI risk increased, benefit with early angiography increased), lack of statistical interaction likely reflects underpowered subgroups in this case rather than a spurious finding. In addition, TACTICS-TIMI 18 was also a trial of the IIb/IIIa inhibitor tirofiban, which continues to have a limited role in NSTE-ACS, primarily as bailout therapy in patients undergoing PCI of high-risk lesions.

Angiography is preformed immediately for refractory angina, hemodynamic instability, ventricular arrythmia, or acute heart failure. Those without immediate need but still intermediate risk will undergo invasive strategy within 48 hours while receiving medical therapy. Medical therapy will usually include both anti-thrombin strategies and anti-platelet strategies seen below. ACC/AHA Class 1 recommendation: anti-coagulation recommended for all patients with NSTE-ACS: Unfractionated heparin or LMWH. Aspirin Class I therapy in all ACS patients 162-325 mg (rapidly inhibits platelet activation by halting thromboxane A2 production). P2Y12 inhibitor AHA/ACC Class 1 (clopidogrel, prasugrel, ticagrelor). Certain newer trials so benefit to Ticagrelor and prasugrel, still not clear about which is best but all patients need to be on one of the 3. Newer agents likely better based on recent studies. Prasugrel has increased bleeding risk but better ichemic outcomes. Ticagrelor (see PLATO Trial) has reduction in death from vascular causes or MI in 1 year compared to clopidogrel, may see bradycardia. Prasugrel and ticagrelor more rapid onset. Unclear if patients should be pre-treated prior to invasive strategies in first 24 hours. May have benefit, but may also delay CABG if needed.

PLACE ALL PATIENTS WITH NSTEMI ON APPROPRIATE MEDICAL THERAPY. RESIDENTS CAN ALWAYS START WITH ASPIRIN AND ANTI-THROMBIN AND DISCUSS PGY12 TIMING with CARDS.

Early trials such as the VA Cooperative Study (1983) and ISIS-2 (1988) demonstrated that aspirin, which inhibits platelets through irreversible cyclooxygenase blockade, decreases mortality in UA/NSTEMI. Clopidogrel, a newer antiplatelet agent that irreversibly binds to the P2Y12 ADP receptors, has been suggested to have better outcomes. CURE was designed to evaluate if clopidogrel would further improve outcomes from ACS when added to ASA.

The Clopidogrel in Unstable Angina to Prevent Recurrent Events (CURE) trial randomized 12,562 patients with UA/NSTEMI to either dual antiplatelet therapy with aspirin plus plavix or to aspirin alone immediately upon presentation. At a mean follow-up of 9 months, dual antiplatelet therapy was associated with a significant reduction in the composite primary endpoint of CV mortality, nonfatal MI, or stroke, largely due to fewer MIs. However, the addition of clopidogrel was associated with increased rate of major bleeding.

The thienopyridines clopidogrel (CURE; 2001) and prasugrel (TRITON-TIMI 38; 2007) irreversibly inhibit platelets through P2Y12 ADP receptor blockade and reduce CV outcomes in ACS. The irreversible effects of both thienopyridines is thought to account for the increased bleeding from major surgical procedures including CABG, and thus investigators sought an antiplatelet agent with different pharmacokinetics. Ticagrelor is a nucleoside analogue acts via reversible inhibition of ADP receptors. It has a more rapid onset, more potent platelet inhibition, and more predictable pharmacodynamics, although its clinical utility had not yet been established.

The 2009 Platelet Inhibition and Patient Outcomes (PLATO) trial randomized 18,624 patients with ACS (37.5% with STEMI) to ticagrelor or clopidogrel, in addition to standard care. At 12 months, the ticagrelor group had lower rates of CV death, MI, or stroke than clopidogrel (9.8% vs. 11.7%) and all-cause mortality (4.5% vs. 5.9%). While there was no difference in major bleeding, ticagrelor was associated with more non-CABG-related bleeding (4.5% vs. 3.8%). The ticagrelor group experienced a higher rate of dyspnea (13.8% vs. 7.8%) and a trend towards more bradycardia (4.4% vs. 4.0%), likely due to ticagrelor’s close resemblance to adenosine. 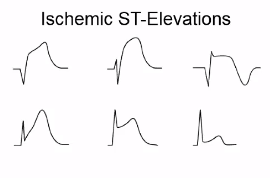 ST elevation is hallmark of disorder

Thrombolytic therapy: treatment at rescue hospital <30 minutes if PCI >2 hours away. Some stroke risk. NSTEMI shows no benefit on subgroup analysis, only use for STEMI. Contraindicated with high bleeding risks, see checklist.

The role of primary PCI in cardiogenic shock was evaluated in the 1999 SHould we emergently revascularize Occluded Coronaries for Cardiogenic shocK (SHOCK) trial, which randomized 302 patients in cardiogenic shock after acute MI to a strategy of early revascularization (PCI or CABG within 12 hours of diagnosis) or to initial medical stabilization including fibrinolysis and IABP. There was a trend towards improved survival in the primary endpoint of mortality at 30 days, but this failed to achieve significance. This may be due to the fact that the trial was underpowered to detect such a difference. However, the benefit became significant at 6 months, and follow-up of the SHOCK trial cohort demonstrated the benefit or revascularization at 1 and 6 years, suggesting that the benefit of revascularization persisted for years.

Beta-adrenergic blockers: Initiate within first 24 hours in absence of heart failure and shock.

Class II: Reasonable for all STEMI patients without contraindications. \

Class 1: high intensity statin therapy in all patients with STEMI

We presented a case of a 60 year old male with history of HTN, HLD, GERD and PE who presented for intermittent chest pain for 3 days that he described as tightness and pressure over his sternum. It does radiate up to his neck and is made worse by exertion. Family history of MI in his father in his early 50s. His cath revealed 100% stenosis due to thrombotic lesion in the mid-Cx. He was discharged but returned 2 days later due to sudden severe shortness of breath, chest pressure and no improvement with nitroglycerin, he had a new harsh systolic murmur across his precordium and was diagnosed with new severe mitral regurgitation secondary to papillary muscle rupture. He was taken urgently to he cath lab after intra-aortic balloon pump placed for mitral valve replacement.